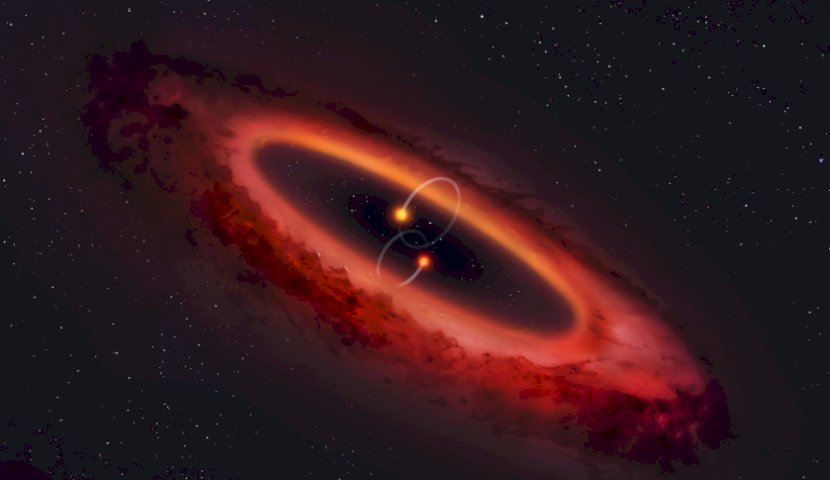 An international team led by an astronomer from the University of Warwick and Australia’s Monash University has discovered the first confirmed example of a dual star system.

The overall system presents the unusual sight of a thick hoop of gas and dust circling at right angles to the binary star orbit. Until now, this setup only existed in theorists’ minds, but the ALMA observation proves that polar discs of this type exist, and may even be relatively common.

The new research is published by Royal Society University Research Fellow Dr Grant Kennedy of the University of Warwick’s department of physics and Centre for Exoplanets and Habitability in Nature Astronomy in a paper titled: 'A circumbinary protoplanetary disc in a polar configuration'.

Dr Kennedy said, "Discs rich in gas and dust are seen around nearly all young stars, and we know that at least a third of the ones orbiting single stars form planets. Some of these planets end up being misaligned with the spin of the star, so we’ve been wondering whether a similar thing might be possible for circumbinary planets.

"A quirk of the dynamics means that a so-called polar misalignment should be possible, but until now we had no evidence of misaligned discs in which these planets might form."

Dr Kennedy and his fellow researchers used ALMA to pin down the orientation of the ring of gas and dust in the system. The orbit of the binary was previously known, from observations that quantified how the stars move in relation to each other. By combining these two pieces of information they were able to establish that the dust ring was consistent with a perfectly polar orbit.

"Perhaps the most exciting thing about this discovery is that the disc shows some of the same signatures that we attribute to dust growth in discs around single stars. We take this to mean planet formation can at least get started in these polar circumbinary discs. If the rest of the planet formation process can happen, there might be a whole population of misaligned circumbinary planets that we have yet to discover, and things like weird seasonal variations to consider," Dr Kennedy said.

If there were a planet or planetoid present at the inner edge of the dust ring, the ring itself would appear from the surface as a broad band rising almost perpendicularly from the horizon.

The polar configuration means that the stars would appear to move in and out of the disc plane, giving objects two shadows at times. Seasons on planets in such systems would also be different. On Earth they vary throughout the year as we orbit the sun. A polar circumbinary planet would have seasons that also vary as different latitudes receive more or less illumination throughout the binary orbit.

Monash University's Dr Daniel Price of the Centre for Astrophysics (MoCA) and School of Physics and Astronomy, and co-author of the 'A circumbinary protoplanetary disc in a polar configuration' paper, added, "We used to think other solar systems would form just like ours, with the planets all orbiting in the same direction around a single sun. But with the new images we see a swirling disc of gas and dust orbiting around two stars. It was quite surprising to also find that that disc orbits at right angles to the orbit of the two stars."

The research is supported by the Monash Warwick Alliance, established by the University of Warwick and Monash University in 2012 to develop an alliance with a breadth, scale and impact beyond standard practice in the sector.