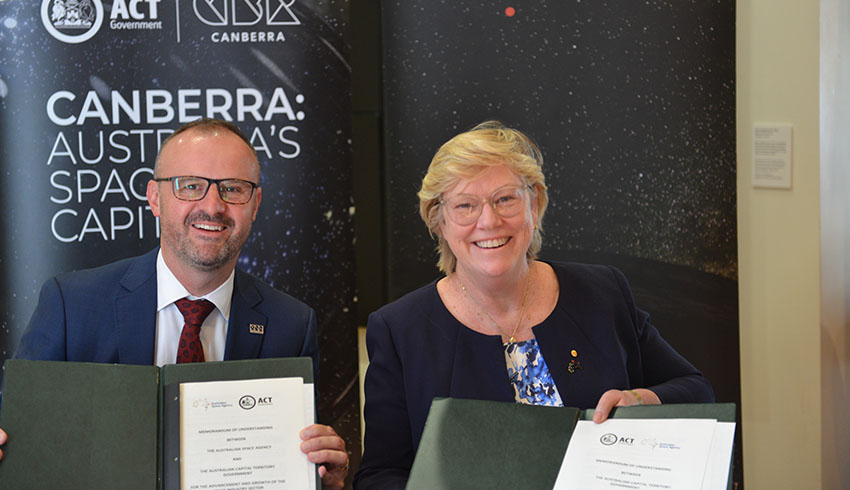 The Australian Space Agency and ACT government have set a trajectory to further drive the growth of Australia’s space sector with the signing of a memorandum of understanding (MoU).

The MoU will establish a framework of co-operation in the development of space-related industries as the Australian Space Agency looks to strengthen the national space sector from its location in Adelaide.

Minister for Industry, Science and Technology Karen Andrews said the agreement outlines key areas where the agency can work with the ACT government to boost the growth of Australia’s space industry.

"Our plan to further grow Australia’s economy includes an aim to triple the size of Australia’s space sector to $12 billion and create up to 20,000 new jobs by 2030," Minister Andrews said.

ACT Chief Minister Andrew Barr said the signing demonstrated his government’s commitment to supporting space industries, including critical infrastructure, saying, "With nearly one in four Australian space industry jobs based in Canberra, we recognise that building partnerships in this sector will strengthen the local and national industry and create more jobs here in Canberra."

"All states and territories have a vital role to play in growing our space sector. We’re continuing to work closely with all jurisdictions across Australia as we establish our location in Adelaide," Dr Clark said.

The Australian Space Agency was established in July 2018 with an initial investment of $41 million over four years in its development as part the government's plan to grow the sector, and create an additional 1.25 million jobs over the next five years. Additional MoUs with other states and territories are expected to follow.