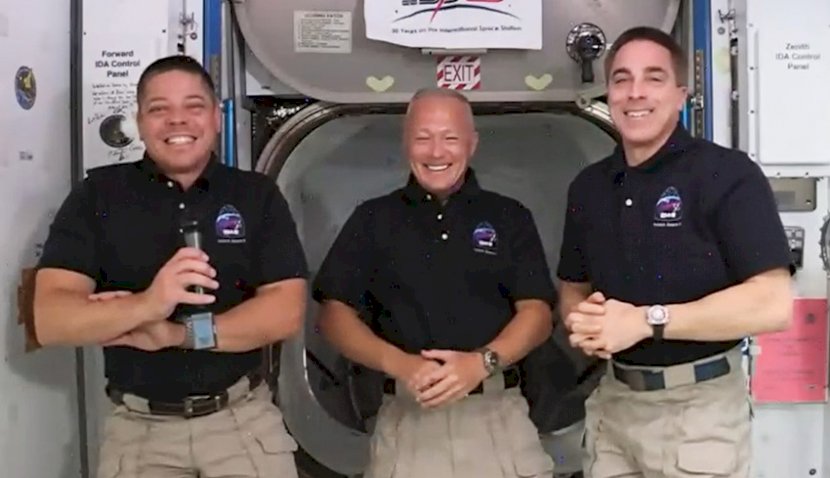 The International Space Station has two new NASA astronauts after the SpaceX Crew Dragon arrived over the weekend, with the newly-expanded Expedition 63 crew now ramping up microgravity research in the coming days and weeks. 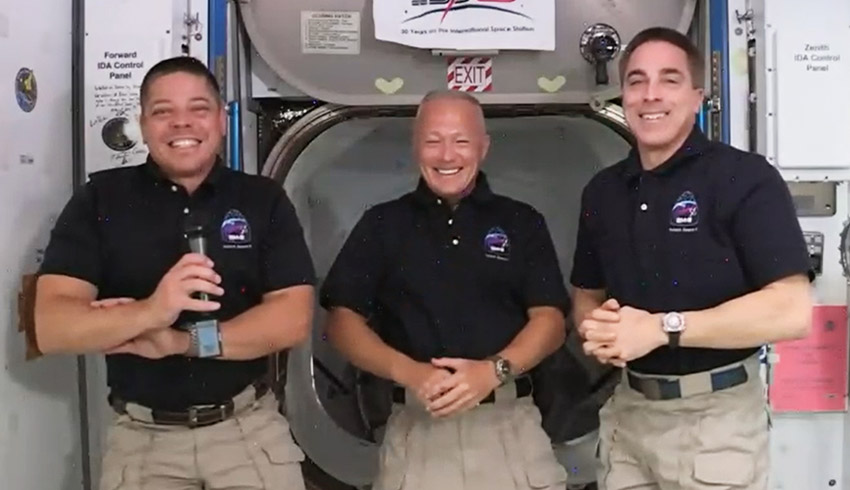 NASA astronauts Doug Hurley and Bob Behnken are getting up to speed with ISS systems and operations on their first full day as Expedition 63 crewmates. The duo is also unpacking the Crew Dragon vehicle today and integrating its systems with the space station.

The duo joined NASA Commander Chris Cassidy, who has been on orbit since 9 April, for a news conference and talked about the historical nature of the first crewed Dragon mission.

Hurley and Behnken, who each flew on two space shuttle missions, also described the differences between the Dragon crew ship and the now-retired shuttles.

The two Roscosmos cosmonauts, Anatoly Ivanishin and Ivan Vagner, focused on science and routine operations in the Russian segment of the orbiting lab. They joined their NASA crewmates in the morning to review Crew Dragon emergency procedures. Afterward, the duo explored advanced Earth photography techniques and ways to improve space exercise.

It is the second arrival and autonomous docking to the ISS for a Crew Dragon spacecraft and the first time any commercially built spacecraft has delivered astronauts to the orbiting laboratory.

Known as NASA’s SpaceX Demo-2, the mission is an end-to-end test flight to validate the SpaceX crew transportation system, including launch, in-orbit, docking and landing operations and pave the way for its certification for regular crew flights to the station as part of NASA’s Commercial Crew Program.

NASA administrator Jim Bridenstine said at the successful launch, "Today a new era in human spaceflight begins as we once again launched American astronauts on American rockets from American soil on their way to the International Space Station, our national lab orbiting Earth."

For operational missions, Crew Dragon will be able to launch as many as four crew members and carry more than 100 kilograms of cargo, enabling the expansion of the inhabitants of the space station, increasing the time dedicated to research in the unique microgravity environment, and returning more science back to Earth.

"I thank and congratulate Bob Behnken, Doug Hurley, and the SpaceX and NASA teams for this significant achievement for the United States. The launch of this commercial space system designed for humans is a phenomenal demonstration of American excellence and is an important step on our path to expand human exploration to the moon and Mars," Bridenstine added.

The Crew Dragon being used for this flight test can stay in orbit about 110 days, and the specific mission duration will be determined once on station based on the readiness of the next commercial crew launch.

The operational Crew Dragon spacecraft will be capable of staying in orbit for at least 210 days as a NASA requirement.

At the conclusion of the mission, Behnken and Hurley will board Crew Dragon, which will then autonomously undock, depart the space station, and re-enter Earth’s atmosphere. Upon splashdown off Florida’s Atlantic coast, the crew will be picked up by the SpaceX recovery ship and returned to the dock at Cape Canaveral.

Both companies are focused on test missions, including abort system demonstrations and crew flight tests, ahead of regularly flying crew missions to the space station. Both companies’ crewed flights will be the first times in history NASA has sent astronauts to space on systems owned, built, tested and operated by private companies.