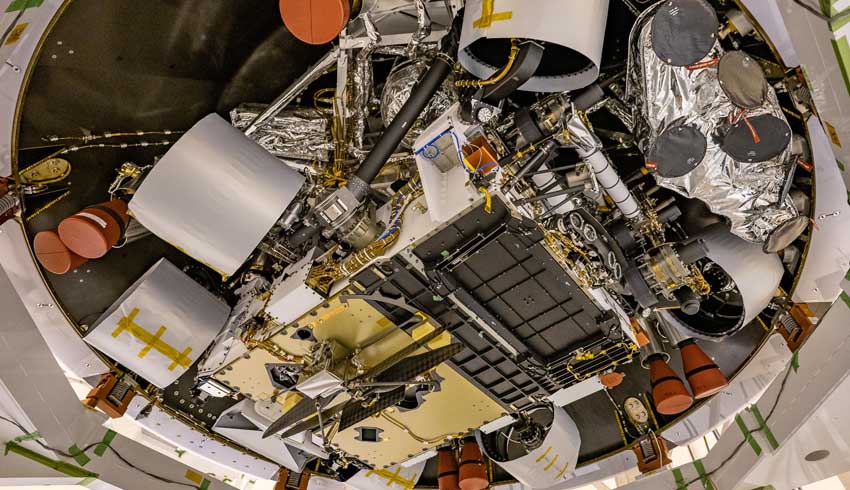 The NASA/JPL Perseverance Mars rover has been attached to the top of the United Launch Alliance’s Atlas V Rocket ahead of its mission launch to Mars later this month.

Encased in the nose cone that will protect it during launch, the rover and the rest of the Mars 2020 spacecraft – the aeroshell, cruise stage, and descent stage – were affixed to a United Launch Alliance Atlas V booster on Tuesday, 7 July, at Cape Canaveral Air Force Station in central Florida.

The process began when a 60-ton hoist on the roof of the Vertical Integration Facility at Space Launch Complex 41 lifted the nose cone, otherwise known as the payload fairing, 39 metres to the top of the waiting rocket.

There, engineers made the physical and electrical connections that will remain between booster and spacecraft until about 50 to 60 minutes after launch, when the two are pyrotechnically separated and Perseverance is on its way.

John McNamee, project manager for the Mars 2020 Perseverance rover mission at NASA's Jet Propulsion Laboratory in southern California said, "I have seen my fair share of spacecraft being lifted onto rockets. But this one is special because there are so many people who contributed to this moment. To each one of them I want to say, we got here together, and we'll make it to Mars the same way."

With the mating of spacecraft and booster complete, the final testing of the two (separately and as one unit) will be underway. Then two days before the 30 July launch, the Atlas V will leave the Vertical Integration Facility for good.

Travelling by rail, it will cover the 550 metres to the launch pad in about 40 minutes. From there, Perseverance has about seven months and 467 million kilometres to go before arriving at Mars.

NASA and United Launch Alliance recently updated the mission's launch period – the range of days the rocket can launch in order to reach Mars. It now spans from 30 July to 15 August.

The launch period opening changed from 17 to 30 July due to launch vehicle processing delays in preparation for spacecraft mate operations. Four days were also added to the previously designated 11 August end of the launch period.

NASA and United Launch Alliance Flight Teams were able to provide those extra days after final weights of both the spacecraft and launch vehicle became available, allowing them to more accurately calculate the propellant available to get Perseverance on its way.

No matter what day Perseverance lifts off during its 30 July to 15 August launch period, it will land in Mars' Jezero Crater on 18 February 2021. Targeting landing for one specific date and time helps mission planners better understand lighting and temperature at the landing site, as well as the location of Mars-orbiting satellites tasked with recording and relaying spacecraft data during its descent and landing.

Managed by JPL, the Mars 2020 Perseverance rover's astrobiology mission will search for signs of ancient microbial life. It will also characterise the planet's climate and geology, pave the way for human exploration of the Red Planet, and be the first planetary mission to collect and cache Martian rock and regolith (broken rock and dust).

Subsequent missions, currently under consideration by NASA in co-operation with the European Space Agency, would send spacecraft to Mars to collect these cached samples from the surface and return them to Earth for in-depth analysis.