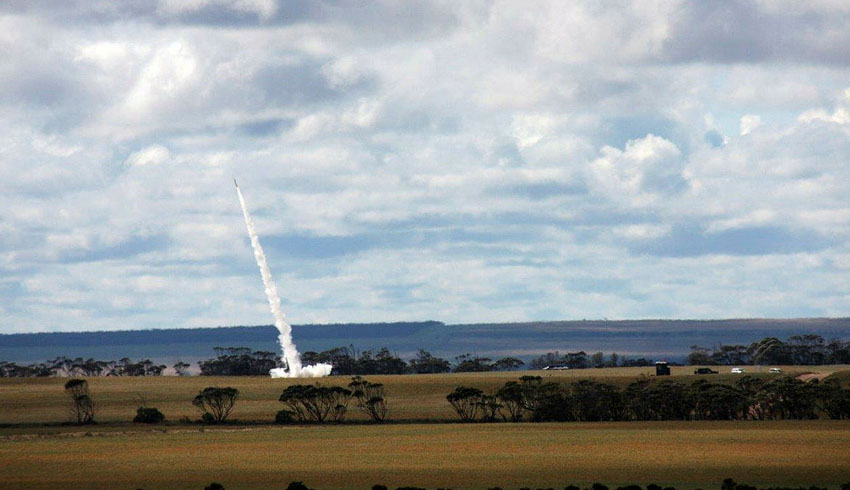 As part of a joint effort between the Royal Australian Air Force, DEWC Systems, Southern Launch and T-minus engineering, a DART rocket carrying a Defence payload has launched from Koonibba Test Range in South Australia, marking the first commercial rocket launch to the edge of space from Australia.

At 10:09am on 19 September 2020, Southern Launch ignited Australia’s first commercial space-capable rocket at the Koonibba Test Range north-west of Ceduna in South Australia.

And in a second first for Australia, only an hour and and 40 minutes later at 11:49am a second space capable launch was safely completed.

A recovery effort is currently underway to locate the DEWC-SP1 payloads and DART rocket stages.

At just 3.4 metres long and weighing 34 kilograms, the DART rocket is a fraction of the size of rockets launched by NASA and SpaceX.

DEWC chief executive Ian Spencer welcomed the achievement, “DEWC Systems is proud to collaborate on this project with Southern Launch and I am grateful for the support given by the Koonibba community and the use of their country.”

This successful launch makes a great start for the DART vehicle with rocket manufacturer T-Minus Engineering keen on getting more rockets off the ground in Australia and around the World.

“We congratulate the team at Southern Launch and DEWC Systems for this momentous achievement and establishing a commercial rocket launch site in South Australia,” Roel Eerkens, T-Minus Engineering Co-Founder said.

“There is so much potential going forward in this growth sector and it’s great to see two South Australian companies leading the charge. It is onwards and upwards from here,” GPCAPT Bearman said.

Minister for Defence Linda Reynolds said space was an increasingly important domain, which is why the government is investing $7 billion over the next decade in space capabilities as part of the 2020 Defence Strategic Update and Force Structure Plan.

“The payload, carried on a DART rocket, provides a stepping stone for Air Force to explore how advanced rapidly deployable networked sensors can be employed to provide information across Defence networks.

Minister for Defence Industry Melissa Price said the DART rocket launch is a partnership between government and industry, demonstrating future opportunities for both commercial and government applications.

“The rocket is unlike any rocket ever launched in Australia, and is part of what is known as ‘New Space’ technologies – small rockets carrying reduced sized satellites using commercially available technologies.”

“This rocket launch event has put Koonibba on the map. Now, people all over Australia have heard about us and the Koonibba community,” Corey McLennan, Koonibba Community Aboriginal Council chairman, said.

“So many things had to come together to make this work. It been a huge team effort with industry, government and the community collaborating to achieve success,” Senator Patrick said.

These launches represent the glowing start of a growing Australian space industry, with the Australian Space Agency aiming to increase employment by 30,000 people and be valued at $12 billion by 2030.