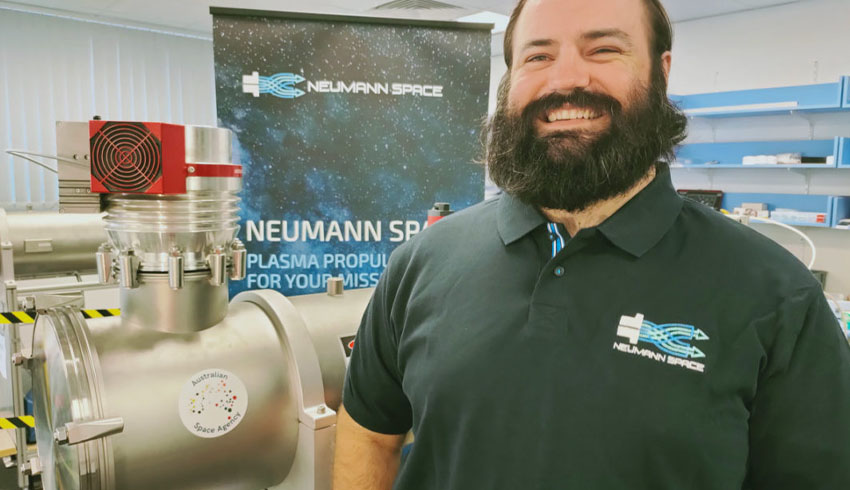 Founder and chief scientist of Neumann Space, Dr Patrick “Paddy” Neumann, has been awarded the coveted 2020 Lawrence Sperry Award by the prestigious American Institute of Aeronautics and Astronautics.

Awarded annually since 1936, the Lawrence Sperry Award is presented for a notable contribution made by a young person, age 35 or under, to the advancement of aeronautics or astronautics.

Dr Neumann told Space Connect, "I have been fascinated by all things space since a young age, including planetary exploration, astronomy, astrophysics and human spaceflight. Watching the Neptune fly-by of Voyager 2 live from JPL on ABC's Quantum TV show cemented my desire to work in space research or technology in any way that I could.

"Choosing to study physics and engineering at the University of Sydney led me towards plasma propulsion, which has been the main focus of my work."

This award honours Lawrence Sperry, pioneer aviator and inventor, who died in 1923 in a forced landing while attempting a flight across the English Channel.

The award will be presented to Dr Neumann during the annual AIAA Aerospace Spotlight Awards Gala to be held in Washington, DC, on 20 May 2020.

Dr Neumann added, "Having my contribution to the future of space activities recognised in such a way is not only a source of immense pride but also an incredible vote of confidence in my research and the work we undertake at Neumann Space."

In receiving this award, Dr Neumann joins a very distinguished list of recipients. Dr Neumann is the the third Australian in history to receive it after Dr Michael West (2018, Department of Defence) and Dr Kimberley Clayfield (2014, CSIRO Space Sciences and Technology).

Since 1963, members from a single professional society have achieved virtually every milestone in modern American flight. That society is the American Institute of Aeronautics and Astronautics.

"It is wonderful to join two other inspirational Australians, Dr Kimberley Clayfield and Dr Michael West, among the other previous recipients of the Lawrence Sperry Award, as well as truly humbling to join the company of such luminaries as Space Shuttle Astronaut Sally Ride and Apollo Flight Director Gene Kranz," Dr Neumann said.

With nearly 30,000 individual members from 91 countries, and 95 corporate members, AIAA is the world’s largest technical society dedicated to the global aerospace profession.