NASA fits Mars Helicopter to Perseverance rover ahead of next tests 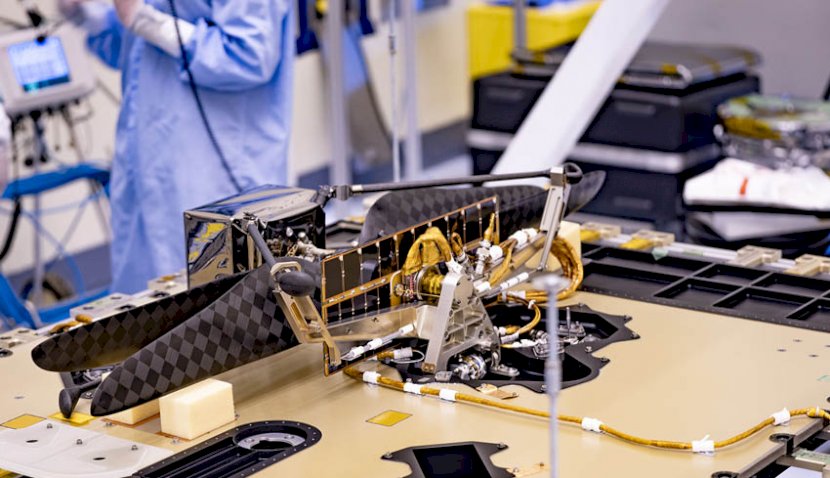 With the launch period of NASA’s Mars 2020 Perseverance rover opening in 14 weeks, final preparations of the spacecraft continue at the Kennedy Space Center in Florida. In the past week, the assembly, test and launch operations team completed important milestones, fuelling the descent stage – and attaching the Mars Helicopter.

NASA fits Mars Helicopter to Perseverance rover ahead of next tests 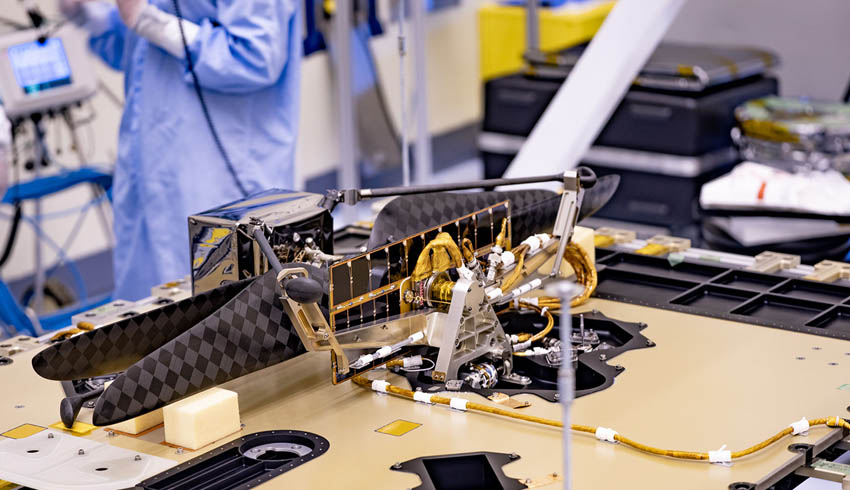 The Mars Helicopter will be the first aircraft in history to attempt power-controlled flight on another planet.

Over the weekend, 401 kilograms of hydrazine monopropellant were loaded into the descent stage's four fuel tanks. As the aeroshell containing the descent stage and rover enter the Martian atmosphere on 18 February 2021, the propellant will be pressure-fed through 37 metres of stainless steel and titanium tubing into eight Mars landing engines.

The engines' job: to slow the spacecraft, which will be traveling at about 80 metres per second when it's 2,200 metres in altitude, to 0.75 metres per second by the time it's about 20 meters above the surface.

Maintaining this rate of descent, the stage will then perform the sky crane manoeuvre: Nylon cords spool out to lower the rover 7.6 metres below the descent stage; when the spacecraft senses touchdown at Jezero Crater, the connecting cords are severed and the descent stage flies off.

David Gruel, the Mars 2020 assembly, test and launch operations manager at JPL, welcomed the milestone, saying, “The last hundred days before any Mars launch is chock-full of significant milestones. Fuelling the descent stage is a big step. While we will continue to test and evaluate its performance as we move forward with launch preparations, it is now ready to fulfil its mission of placing Perseverance on the surface on Mars.”

After the descent stage fuelling, the system that will deliver the Mars Helicopter to the surface of the Red Planet was integrated with Perseverance. The helicopter, which weighs 1.8 kilograms and features propellers 1.2 metres in diameter, is cocooned within the delivery system.

After confirming data and commands could be sent and received, they attached the delivery system to the rover.

Finally, the team confirmed the helicopter could receive an electrical charge from the rover. Before being deployed onto the surface of Jezero Crater, the Mars Helicopter will rely on the rover for power. Afterward, it will generate its own electrical power through a solar panel located above its twin counter-rotating propellers.

The helicopter will remain encapsulated on the rover's belly for the next year and will be deployed around the beginning of May – roughly two-and-a-half months after Perseverance's landing. Once the rover drives about 100 metres away and the helicopter undergoes an extensive systems check, it will execute a flight-test campaign for up to 30 days.

The Perseverance rover is a robotic scientist weighing 1,025 kilograms. It will search for signs of past microbial life, characterise the planet's climate and geology, collect samples for future return to Earth and pave the way for human exploration of the Red Planet.

No matter what day Perseverance launches during its 17 July-5 August launch period, it will land on Mars' Jezero Crater on 18 February 2021.