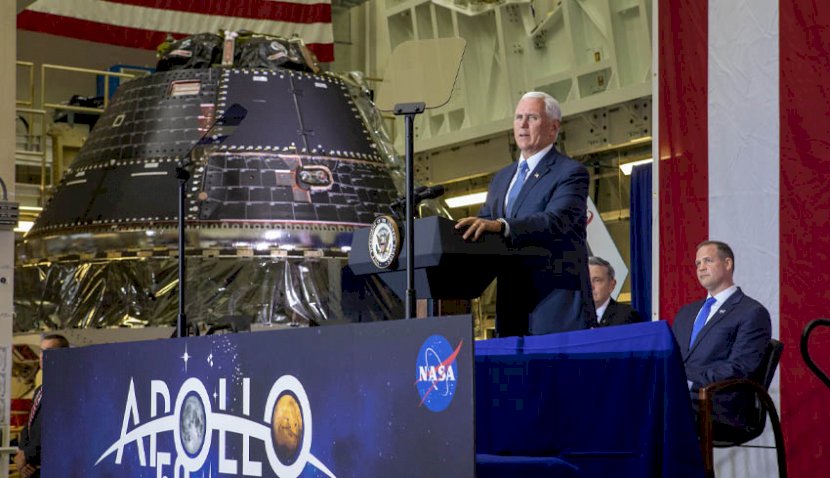 Vice President Mike Pence visited and gave remarks at the Neil Armstrong Operations and Checkout Building at NASA’s Kennedy Space Center in Florida on Saturday to commemorate the 50th anniversary of the agency’s Apollo 11 moon landing, and announced the completion of the crew capsule for the Artemis lunar mission. 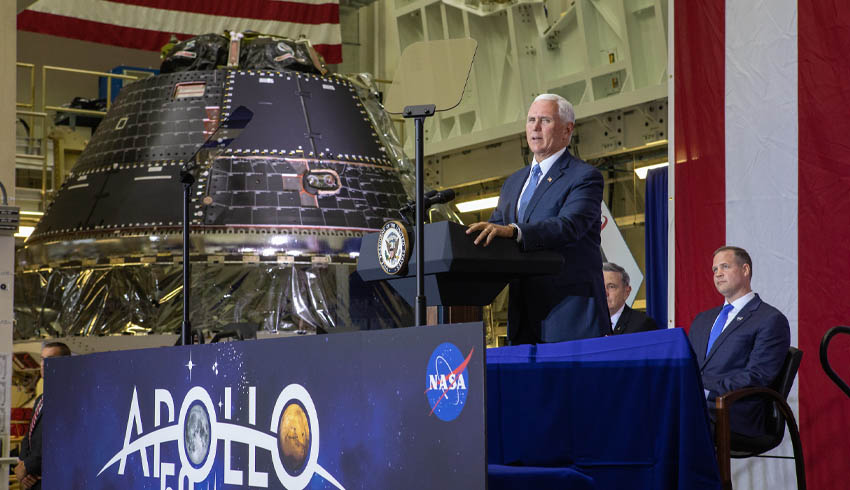 Vice President Pence said, "Thanks to the hard work of the men and women of NASA, and of American industry, the Orion crew vehicle for the Artemis 1 mission is complete and ready to begin preparations for its historic first flight."

NASA’s goal 50 years ago was to prove the agency could land humans on the moon and return them safely to Earth. The goal now is to return to the moon in a sustainable way to prepare for the next giant leap – sending astronauts to Mars for the first time ever.

Artemis 1 will launch NASA’s Orion spacecraft and Space Launch System (SLS) rocket around the moon to test the system and pave the way for landing the first woman and the next man on the moon in five years, as well as future missions to Mars.

Bridenstine welcomed the milestone and America's renewed commitment to lunar exploration, saying, "President [Donald] Trump and Vice President Pence have given us a bold direction to return to the moon by 2024 and then go forward to Mars. Their direction is not empty rhetoric. They have backed up their vision with the budget requests need to accomplish this objective. NASA is calling this the Artemis program in honour of Apollo’s twin sister in Greek mythology, the goddess of the moon. And we are well on our way to getting this done."

Engineers recently completed building and outfitting the Orion crew module at Kennedy. The underlying structure of the crew module, known as the pressure vessel, was manufactured at NASA’s Michoud Assembly Facility in New Orleans and shipped to Kennedy, where teams have integrated thousands of parts into the crew module and conducted tests to certify all of its systems for flight.

Orion’s European Service Module, which will provide the power and propulsion for Orion during the mission, also is complete. Contributed by ESA (European Space Agency), the service module was manufactured by Airbus in Bremen, Germany, and shipped to Kennedy in November 2018 for final assembly and integration.

Engineers have begun operations to join the crew module to the service module, and teams are connecting power and fluid lines to complete hardware attachment.

Once the two modules are joined, engineers will install a heatshield backshell panel on the spacecraft and prepare it for a September flight inside the agency’s Super Guppy aircraft to NASA’s Plum Brook Station in Sandusky, Ohio. Testing at Plum Brook will ensure the joined modules can withstand the deep space environment.

Orion is part of NASA’s backbone for deep space exploration, along with SLS and the lunar Gateway. During Artemis 1, SLS will send the uncrewed spacecraft – consisting of the crew and service modules – thousands of miles past the moon for the first in a series of increasingly complex missions. Artemis 2 will be the first of these new missions to the moon with astronauts on board, followed by Artemis 3, which will launch the next American moonwalkers into a new era of exploration.

Working with US companies and international partners, NASA will push the boundaries of human exploration forward to the moon. Through Artemis, the agency will establish a sustainable human presence at the moon by 2028 to continue scientific research and discovery, demonstrate new technologies, and lay the foundation for future missions to Mars.