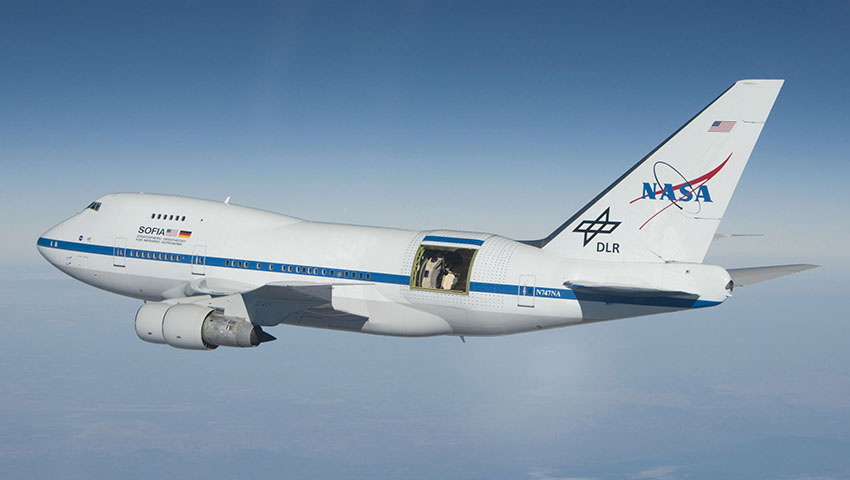 Data from NASA’s Stratospheric Observatory for Infrared Astronomy (SOFIA) has been used to study the Cigar Galaxy in greater detail, revealing how materials that affect the creation of galaxies may get into intergalactic space.

Researchers found, for the first time, that the galactic wind flowing from the centre of the Cigar Galaxy (M82) is aligned along a magnetic field and transports a very large mass of gas and dust – the equivalent mass of 50-60 million Suns.

Enrique Lopez-Rodriguez, a Universities Space Research Association (USRA) scientist working on the SOFIA team, said, "The space between galaxies is not empty. It contains gas and dust – which are the seed materials for stars and galaxies. Now, we have a better understanding of how this matter escaped from inside galaxies over time."

Researchers using the airborne observatory SOFIA found definitively that the wind from the Cigar Galaxy not only transports a huge amount of gas and dust into the intergalactic medium, but also drags the magnetic field so it is perpendicular to the galactic disc. In fact, the wind drags the magnetic field more than 2,000 light-years across – close to the width of the wind itself.

Besides being a classic example of a starburst galaxy, because it is forming an extraordinary number of new stars compared with most other galaxies, M82 also has strong winds blowing gas and dust into intergalactic space.

Astronomers have long theorised that these winds would also drag the galaxy's magnetic field in the same direction, but despite numerous studies, there has been no observational proof of the concept.

These observations indicate that the powerful winds associated with the starburst phenomenon could be one of the mechanisms responsible for seeding material and injecting a magnetic field into the nearby intergalactic medium. If similar processes took place in the early universe, they would have affected the fundamental evolution of the first galaxies.

"One of the main objectives of this research was to evaluate how efficiently the galactic wind can drag along the magnetic field. We did not expect to find the magnetic field to be aligned with the wind over such a large area," Lopez-Rodriguez added.

SOFIA is a specialised Boeing 747SP jetliner modified to carry a 106-inch diameter telescope. It is a joint project of NASA and the German Aerospace Centre, DLR. NASA's Ames Research Center in California's Silicon Valley manages the SOFIA program, science and mission operations in co-operation with the USRA, headquartered in Columbia, Maryland, and the German SOFIA Institute (DSI) at the University of Stuttgart.