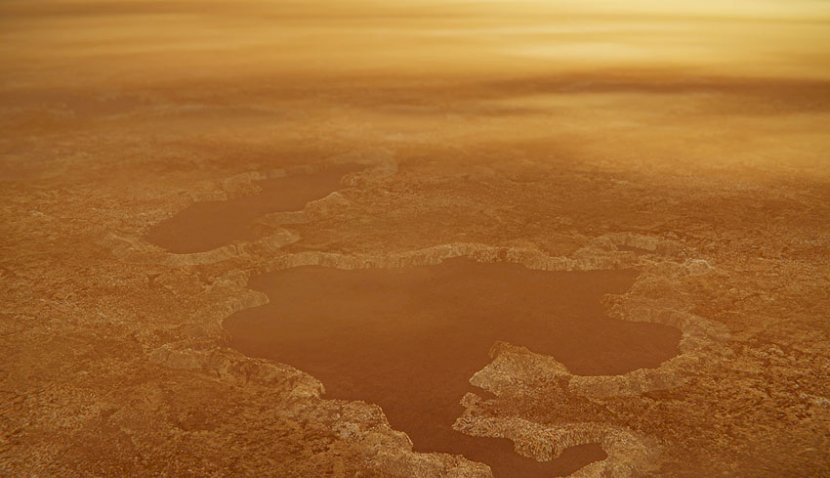 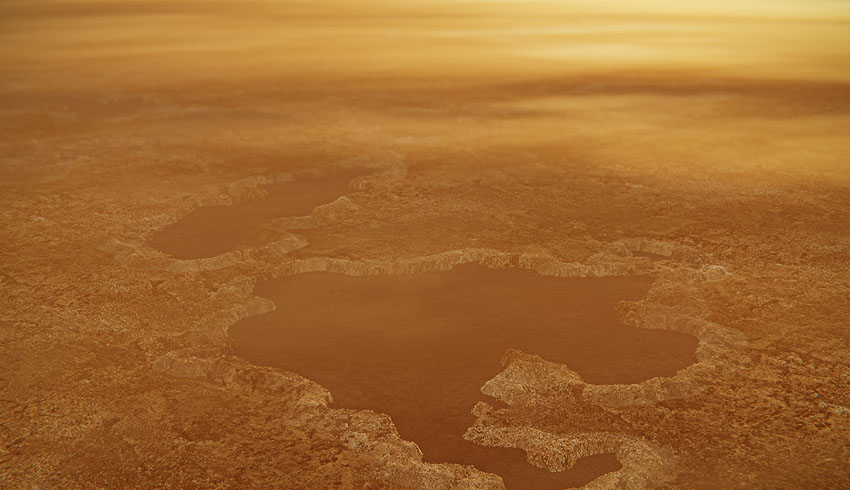 The models suggest that explosions of warming nitrogen created basins in the moon's crust. Titan is the only planetary body in our solar system other than Earth known to have stable liquid on its surface.

But instead of water raining down from clouds and filling lakes and seas as on Earth, on Titan it's methane and ethane – hydrocarbons that we think of as gases but that behave as liquids in Titan's frigid climate.

Most existing models that lay out the origin of Titan's lakes show liquid methane dissolving the moon's bedrock of ice and solid organic compounds, carving reservoirs that fill with the liquid.

This may be the origin of a type of lake on Titan that has sharp boundaries. On Earth, bodies of water that formed similarly, by dissolving surrounding limestone, are known as karstic lakes.

The new, alternative models for some of the smaller lakes (tens of miles across) turn that theory upside down: It proposes pockets of liquid nitrogen in Titan's crust warmed, turning into explosive gas that blew out craters, which then filled with liquid methane. The new theory explains why some of the smaller lakes near Titan's north pole, like Winnipeg Lacus, appear in radar imaging to have very steep rims that tower above sea level – rims difficult to explain with the karstic model.

The radar data were gathered by the Cassini Saturn Orbiter – a mission managed by NASA's Jet Propulsion Laboratory in Pasadena, California – during its last close flyby of Titan, as the spacecraft prepared for its final plunge into Saturn's atmosphere two years ago.

An international team of scientists led by Giuseppe Mitri of Italy's G. d'Annunzio University became convinced that the karstic model didn't jibe with what they saw in these new images.

"The rim goes up, and the karst process works in the opposite way. We were not finding any explanation that fit with a karstic lake basin. In reality, the morphology was more consistent with an explosion crater, where the rim is formed by the ejected material from the crater interior. It's totally a different process," Mitri explained.

Over the last half-billion or billion years on Titan, methane in its atmosphere has acted as a greenhouse gas, keeping the moon relatively warm – although still cold by Earth standards. Scientists have long believed that the moon has gone through epochs of cooling and warming, as methane is depleted by solar-driven chemistry and then resupplied.

In the colder periods, nitrogen dominated the atmosphere, raining down and cycling through the icy crust to collect in pools just below the surface, said Cassini scientist and study co-author Jonathan Lunine of Cornell University in Ithaca, New York.

"These lakes with steep edges, ramparts and raised rims would be a signpost of periods in Titan's history when there was liquid nitrogen on the surface and in the crust," Lunine added.