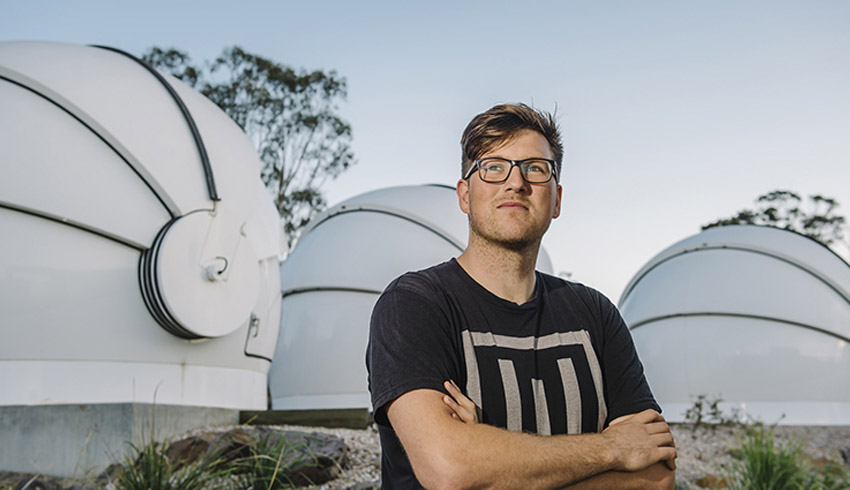 Jake Clark has been granted a prestigious Fulbright Future Scholarship to potentially help answer one of the biggest mysteries of our universe: are we alone?

In the last 30 years, astronomers have looked to the stars trying to find habitable worlds like Earth. USQ astrophysicist Jake Clark's Fulbright project will use data collected by both Australia's largest optical telescope, the Australian Anglo Telescope, and USQ's Mount Kent Observatory.

As part of the research, Clark will use information from NASA’s new planet ﬁnding mission, the Transiting Exoplanet Survey Satellite (TESS), as well as leveraging experience from world expert Dr Natalie Hinkel, a planetary astrophysics and senior research scientist at the Southwest Research Institute in San Antonio.

Clark said, "This project could potentially revolutionise the future of exoplanet-ﬁnding missions through the incredible wealth of Australian and Queensland resources. Instead of looking through huge all-sky telescope surveys, we can ﬁnd planets by analysing the composition of their host stars beforehand."

As part of the Fulbright Future Scholarship, Clark will spend six months at the Southwest Research Institute’s headquarters in San Antonio, Texas, next year.

Clark’s passion for what is beyond the universe started as a seven-year-old when he would set an alarm clock so he could wave to Australian astronaut Dr Andy Thomas on the International Space Station as it passed by.

"I was born and raised in a blue-collar family, in the low socioeconomic suburbs of northern Adelaide. I had no mentors or role models around me who had even passed high school," he said.

The Fulbright program is the largest educational scholarship of its kind and was created by US senator J William Fulbright and the US government in 1946, aimed at increasing research collaboration, cultural understanding and the exchange of ideas.

"Through my research and this prestigious scholarship, I hope to show that no matter your background you can chase your dreams. Maybe I can be someone’s role model like Dr Andy Thomas was for me," Clark added.

Since its inception in Australia in 1949, the Fulbright Commission has awarded over 5,000 scholarships, creating a vibrant, dynamic and interconnected network of alumni.