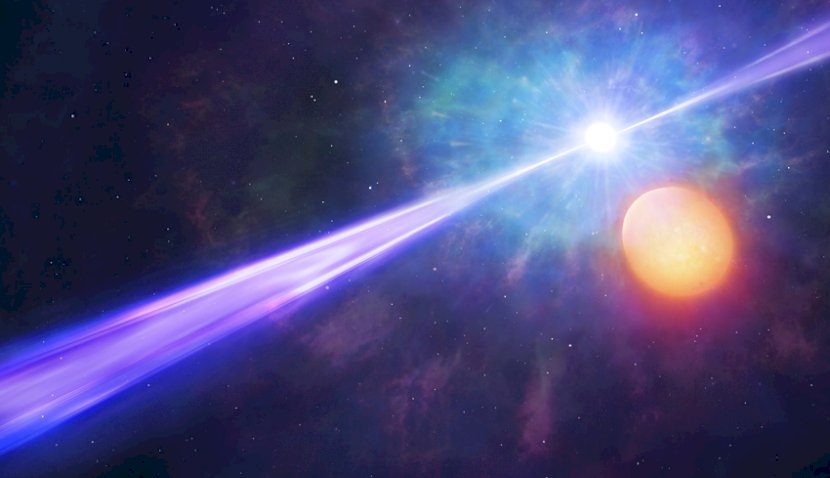 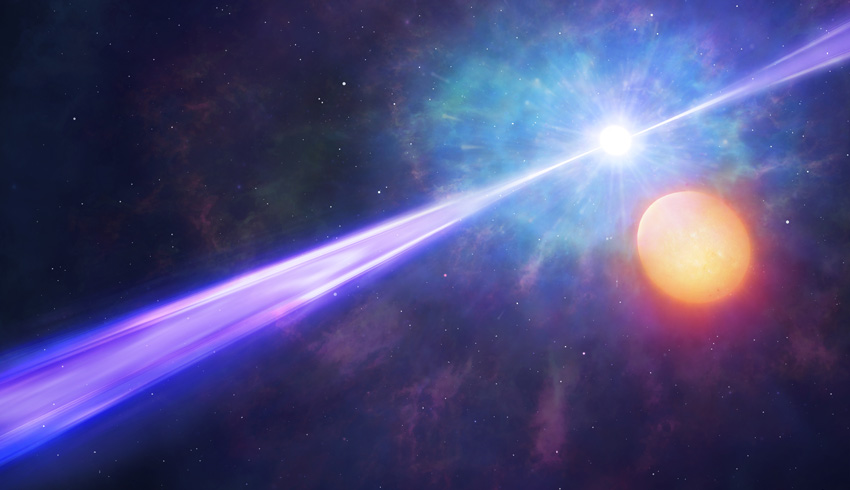 New research solves the mystery of how stars spin fast enough to create conditions to launch a jet of highly energetic material into space, and has found that tidal effects like those between the moon and the Earth are the answer.

The discovery, reported in Monthly Notices of the Royal Astronomical Society, has been made using simulated models of thousands of binary star systems, that is, solar systems that have two stars orbiting one another.

A long gamma-ray burst (GRB), the type examined in this study, occurs when a massive star about 10 times the size of our sun goes supernova, collapses into a neutron star or black hole and fires a relativistic jet of material into space.

Instead of the star collapsing radially inwards, it flattens down into a disc to conserve angular momentum. As the material falls inwards, that angular momentum launches it in the form of a jet along the polar axis.

Lead author Ashley Chrimes, a PhD student in the University of Warwick Department of Physics, said, “We’re predicting what kind of stars or systems produce gamma-ray bursts, which are the biggest explosions in the universe. Until now it’s been unclear what kind of stars or binary systems you need to produce that result.

“The question has been how a star starts spinning, or maintains its spin over time. We found that the effect of a star’s tides on its partner is stopping them from slowing down and, in some cases, it is spinning them up. They are stealing rotational energy from their companion, a consequence of which is that they then drift further away.”

But in order to form that jet of material, the star has to be spinning fast enough to launch material along the axis.

This presents a problem because stars usually lose any spin they acquire very quickly. By modelling the behaviour of these massive stars as they collapse, the researchers have been able to constrain the factors that cause a jet to be formed.

Researchers found that the effects of tides from a close neighbour – the same effect that has the moon and the Earth locked together in their spin – could be responsible for spinning these stars at the rate needed to create a gamma-ray burst.

GRBs are the most luminous events in the universe and are observable from Earth when their jet of material is pointed directly at us. This means that we only see around 10-20 per cent of the GRBs in our skies.

Using a technique called binary population synthesis, the scientists are able to simulate this mechanism in a population of thousands of star systems and so identify the rare examples where an explosion of this type can occur.

Dr Elizabeth Stanway from the University of Warwick Department of Physics said, “Scientists haven’t modelled in detail for binary evolution in the past because it’s a very complex calculation to do. This work has considered a physical mechanism within those models that we haven’t examined before, that suggests that binaries can produce enough GRBs using this method to explain the number that we are observing.

“There has also been a big dilemma over the metallicity of stars that produce gamma-ray bursts. As astronomers, we measure the composition of stars and the dominant pathway for gamma-ray bursts requires very few iron atoms or other heavy elements in the stellar atmosphere. There’s been a puzzle over why we see a variety of compositions in the stars producing gamma-ray bursts, and this model offers an explanation.”