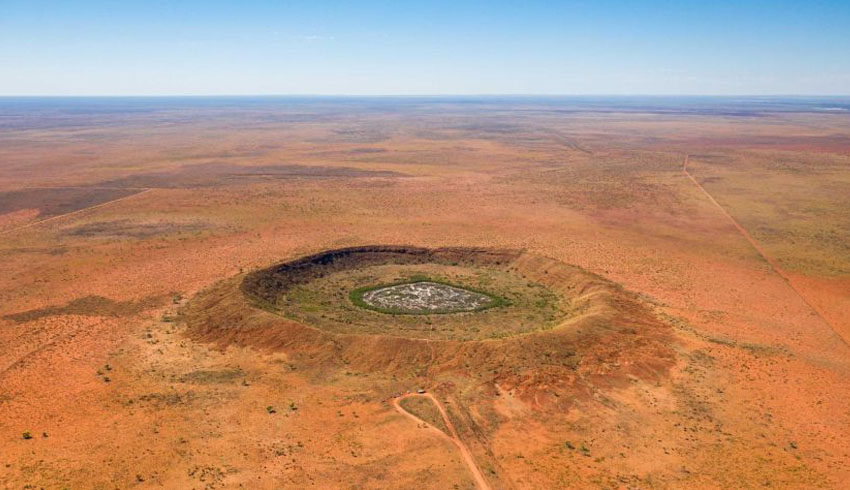 The oldest known impact crater on Earth is the Yarrabubba crater in Western Australia, a 70-kilometre geological feature that doesn’t actually look much like it was hit by a giant rock.

Scientists from the School of Earth and Planetary Sciences at Curtin University in WA and the NASA Johnston Space Center have determined that this is 2.229 billion years old, give or take 5 million years.

That's about half the age of Earth itself and 200 million years older than the previous oldest crater, the 300-kilometre-wide Vredefort Dome in South Africa.

Yarrabubba, named after the Yarrabubba Station, is located in outback WA, 830 kilometres north-east of Perth.

Unlike other more recent impact craters, the passage of geological time, the movement of crustal plates and erosion, means it doesn’t look much like the commonly perceived idea of a crater.

In that distant time, the Earth was just emerging from the Snowball Earth period when much of the planet was covered in ice. The only life was bacteria.

Study co-author an associate professor Nicholas Timms, from the School of Earth and Planetary Sciences at Curtin, said the age of the Yarrabubba impact matched the demise of a series of ancient glaciations.

"After the impact, glacial deposits are absent in the rock record for 400 million years. This twist of fate suggests that the large meteorite impact may have influenced global climate," he said.

Yarrabubba wasn’t recognised as an impact crater until 2003 when a team of US scientists determined that was what it was, from measurements of magnetic anomalies in the area and the presence of rocks shocked by an impact.

However, the age of the impact proved difficult to determine.

In the new study, published in the journal Nature Communications, study lead author Dr Timmons Erickson, from Johnson Space Center in Houston and Curtin, said he and his colleagues analysed pieces of Yarrabubba's shocked rock.

They studied grains of monazite and zircon recrystallised by the impact, measuring quantities of uranium, thorium and lead.

Monazite and zircon readily take up uranium when they crystallise, but not lead, indicating age of the impact.

To see if the impact was connected to the climatic change around that time, the team performed computer simulations of the Yarrabubba strike, slamming a seven-kilometre space object into a landscape covered in ice up to five kilometres thick.

That would have vaporised an enormous amount of ice, producing an immediate greenhouse effect, warming the planet.

Not enough is known about the Earth’s atmosphere at that time to say this is what actually occurred.

"Nevertheless, considering that Earth's atmosphere at the time of impact contained only a fraction of the current level of oxygen, a possibility remains that the climatic forcing effects of H2O vapor released instantaneously into the atmosphere through a Yarrabubba-sized impact may have been globally significant," they wrote in the study.