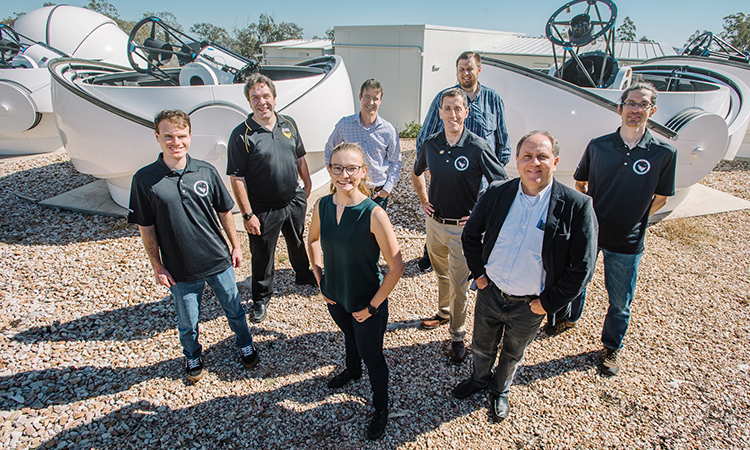 USQ researchers have led a global team of astronomers in the discovery of a new planet orbiting a distant star – the first exoplanet confirmation led by the Toowoomba-based team using the MINERVA-Australis facility.

TOI-257b is about 250 light years away and transits a bright white star every 18 days. It is likely a gaseous world, given its low density – with a mass 40 times that of Earth, but a volume almost 350 times greater than our planet.

Lead author, astrophysicist Dr Brett Addison, said the team followed up an initial detection of TOI-257b from TESS to confirm the exoplanet.

"This is a significant discovery, not just for USQ and Queensland, but as an example of cool and unusual planet types. TOI-257b is an example of what astronomers call ‘sub-Saturns’ (larger than Neptune and smaller than Saturn), a type of planet absent from the solar system," Dr Addison explained.

“The universe is a quirky and diverse place, with broad classes of planet such as sub-Saturns, super-Earths and mini Neptunes that we don’t have here at home. Warm sub-Saturns, like TOI-257b, are rare amongst the currently known exoplanets."

As the only dedicated ‘exoplanet hunting’ facility in the southern hemisphere, MINERVA-Australis has played a key role in the confirmation discovery of 19 exoplanets, but TOI-257b marks the first Australian-led confirmation of planet detected by TESS.

Addison added, "As of January, the TESS mission has delivered a total of 1,604 planetary candidates and follow-up observations have resulted in a total of 37 conﬁrmed planetary discoveries."

Some interesting facts about TOI-257b include:

"It is likely that many more planets will be conﬁrmed in the months to come, and MINERVA-Australis will continue to play an important role. In fact, our data shows strong evidence for a second planet in the system, TOI-257c, which we hope to confirm in the coming year," Dr Addison explained.