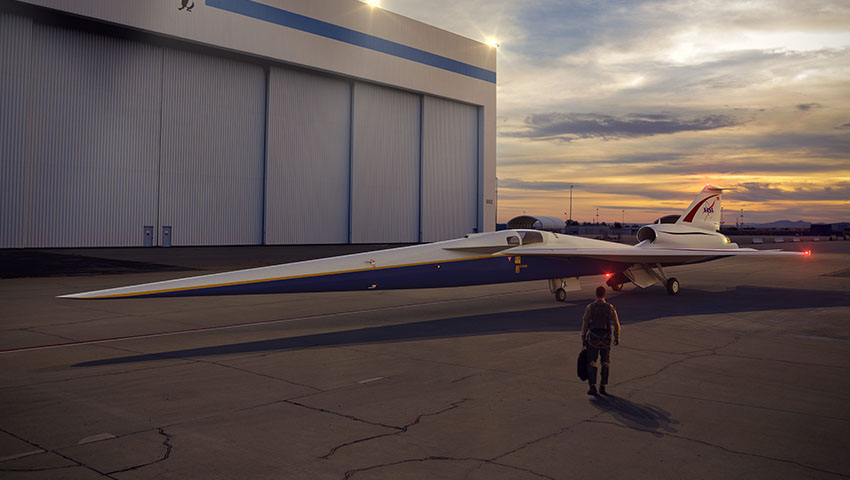 The X-59 Quiet Supersonic Technology aircraft, nicknamed "the son of Concorde", is designed to cruise at 55,000 feet at a speed of over 1500km/h. Incredibly, it will only be 75 Perceived Level decibels (PLdB) loud, the equivalent of a car door closing.

NASA selected Lockheed Martin earlier in 2018 to design, build and flight test the Low Boom Flight Demonstrator, with the maiden flight to be conducted in 2021.

"The start of manufacturing on the project marks a great leap forward for the X-59 and the future of quiet supersonic commercial travel," said Peter Iosifidis, Low Boom Flight Demonstrator program manager.

"The long, slender design of the aircraft is the key to achieving a low sonic boom. As we enter into the manufacturing phase, the aircraft structure begins to take shape, bringing us one step closer to enabling supersonic travel for passengers around the world."

During the testing period, NASA intends to use supersonic F/A-18 Hornet jets over Galveston, Texas to mimic the sonic profile of the X-59, with residents to document noise levels.

Galveston was chosen as the testing area due to its proximity to the Gulf of Mexico, which allows the fighter jets to keep the louder sonic booms out at sea, while quieter sonic "thumps" are sent towards the city.

The X-59 is specifically designed so that shockwaves created don't build into powerful sonic booms. A conventional aircraft has the shockwaves combine as they expand from the airplane's nose and tail, which creates two "thunderous" booms.

However, the X-59's shape sends the shockwaves seperately away from the aircraft, which sends much weaker shockwaves to the ground. The noise will be heard (if at all) as a quick series of soft thumps.

The idea was first proposed over 50 years ago, and has been tested by NASA in the time since. The F-5E fighter jet proved during testing in 2003-2004 that the boom-reducing theory was correct.

“We’ve reached this important milestone only because of the work NASA has led with its many partners from other government agencies, the aerospace industry and forward-thinking academic institutions everywhere,” said Peter Coen, NASA’s Commercial Supersonic Technology project manager.

Lockheed Martin is a global security and aerospace company that employs about 100,000 people worldwide. It is principally engaged in the research, design, development, manufacture, integration and sustainment of advanced technology systems, products and services.