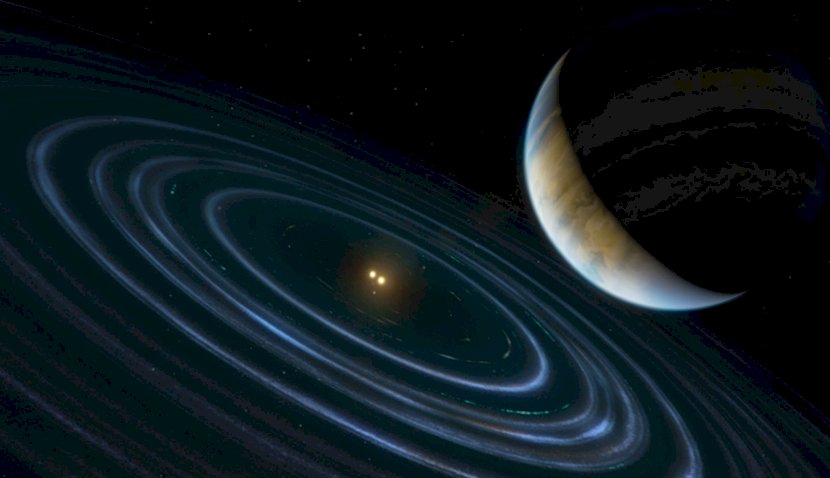 Astronomers are still searching for a hypothetical “Planet Nine” in the distant reaches of our solar system, however, an exoplanet 336 light years from Earth is looking more and more like the Planet Nine of its star system. 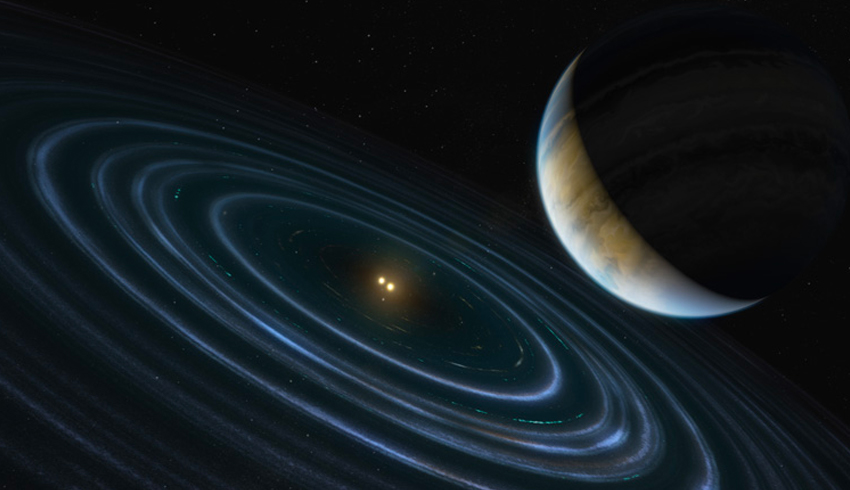 Planet Nine, potentially 10 times the size of Earth and orbiting far beyond Neptune in a highly eccentric orbit about the sun, was proposed in 2012 to explain perturbations in the orbits of dwarf planets just beyond Neptune’s orbit, so-called detached Kuiper Belt objects.

It has yet to be found, if it exists.

A similarly weird extrasolar planet was discovered far from the star HD 106906 in 2013, the only such wide-separation planet known. While much heavier than the predicted mass of Planet Nine — perhaps 11 times the mass of Jupiter, or 3,500 times the mass of Earth — it, too, was sitting in a very unexpected location, far above the dust plane of the planetary system and tilted at an angle of about 21 degrees.

The big question, until now, has been whether the planet, called HD 106906 b, is in an orbit perpetually bound to the binary star — which is a mere 15 million years old compared to the 4.5 billion-year age of our sun — or whether it’s on its way out of the planetary system, never to return.

In a paper appearing on 10 December in The Astronomical Journal, astronomers finally answer that question.

By precisely tracking the planet’s position over 14 years, they determined that it is likely bound to the star in a 15,000-year, highly eccentric orbit, making it a distant cousin of Planet Nine.

Meiji Nguyen, a recent UC Berkeley graduate and first author of the paper explained, “This raises the question of how did these planets get out there to such large separations. Were they scattered from the inner solar system? Or, did they form out there?”

According to senior author Paul Kalas, University of California, Berkeley, adjunct professor of astronomy, the resemblance to the orbit of the proposed Planet Nine shows that such distant planets can really exist, and that they may form within the first tens of millions of years of a star’s life.

Based on the team’s other recent discoveries about HD 106906, the planet seems to favor a scenario where passing stars also play a role.

“Something happens very early that starts kicking planets and comets outward, and then you have passing stars that stabilise their orbits. We are slowly accumulating the evidence needed to understand the diversity of extrasolar planets and how that relates to the puzzling aspects of our own solar system,” Kalas explained.

HD 106906 is a binary star system located in the direction of the constellation Crux.

Astronomers have studied it extensively for the past 15 years because of its prominent disk of dust, which could be birthing planets.

Our solar system may have looked like HD 106906 about 4.5 billion years ago as the planets formed in the swirling disk of debris left over from the formation of the sun.

Kalas, who searches for planets and dust disks around young stars, co-led a team that used the Gemini Planet Imager on the Gemini South Telescope to obtain the first images of the star’s debris disk. In 2015, these observations provided evidence that led theorists to propose that the planet formed close to the binary star and was kicked out because of gravitational interactions with the binary.

The evidence: The stars’ outer dust disk and inner comet belt are lopsided, suggesting that something — the planet — perturbed the symmetry.

Team member Robert De Rosa of the European Southern Observatory in Santiago, Chile, who is a former UC Berkeley postdoctoral fellow added, “The idea is that every time the planet comes to its closest approach to the binary star, it stirs up the material in the disk.

“So, every time the planet comes through, it truncates the disk and pushes it up on one side. This scenario has been tested with simulations of this system with the planet on a similar orbit — this was before we knew what the orbit of the planet was,” De Rosa added.

The problem, as pointed out by those simulating such planet interactions, is that a planet would normally be kicked out of the system entirely, becoming a rogue planet. Some other interaction, perhaps with a passing star, would be necessary to stabilise the orbit of an eccentric planet like HD 106906 b.

A similar scenario has been proposed for the formation of Planet Nine: that its interaction with our giant planets early in our solar system’s history kicked it out of the inner solar system, after which passing stars in our local cluster stabilised its orbit.

Kalas went looking for such a fly-by star for HD 106906 b, and last year he and De Rosa, then at Stanford University, reported finding several nearby stars that would have zipped by the planetary system 3 million years earlier, perhaps providing the nudge needed to stabilise the planet’s orbit.

Now, with precise measurements of the planet’s orbit between 2004 and 2018, Nguyen, de Rosa and Kalas present evidence that the planet is most likely in a stable, but very elliptical, orbit around its binary star.

The science team’s orbital measurements came from comparing astrometric data from the European Space Agency’s Gaia observatory, which accurately maps the positions of billions of  stars, and images from the Hubble Space Telescope. Because Hubble must obscure the glare from the binary star to see the dimmer debris disk, astronomers were unable to determine the exact position of the star relative to HD 106906 b.

Gaia data allowed the team to determine the binary’s position more precisely, and thus chart the movement of the planet relative to the binary between 2004 and 2018, less than one-thousandth of its orbital period.